It’s kind of a Christmas tradition for me that over the holidays I catch up on the books I got for my late-October birthday. One of those this year was The Dig by John Preston, which came out in 2007 but which I had never heard of until my parents recommended it to me.

It’s an interesting novel: it covers the summer and autumn of 1939, when the famous Anglo-Saxon burial at Sutton Hoo in Suffolk was being excavated. The perspective shifts between several different characters, including the initial excavator, Basil Brown, the landowner, Edith Pretty, and archaeologist Peggy Piggott (who was Preston’s aunt).

The story of the excavation itself is pretty complicated, and the tensions it revealed (including the conflict between academics and non-academic professionals and the old one between the British Museum and the provinces) are interesting, but that’s not really what this book is about. It’s less narrative-driven and more about mood, specifically the sense of the mysterious connection with the past in the shadow of an uncertain future.

I enjoyed it, but then those themes are very close to my heart. It’s an interesting view of the process of archaeology as a social and emotional process, and you know I like it when everyone is sad and emotionally repressed.

So it’s been a few weeks since the last time I wrote about my continuing … love-hate relationship isn’t right. Enjoyment-bafflement relationship? … with Vikings. So let’s take a look at what’s been going on since then.

So Lagertha and Aslaug are set up as rivals this season, a rivalry that gets off to a good start when Lagertha imprisons Ubbe and Sigurd and takes Kattegatt back from Aslaug. In the meantime, Ivarr and Ragnar get shipwrecked on the English coast. The irritated crew mutiny, but Ivarr stabs them up to reinforce the point that he is not to be messed with. Bjorn, together with Halfdan and Harald plus Floki, rocks up to Rollo’s castle to meet the kids. Rollo decides to tag along on Bjorn’s Mediterranean adventure because, I dunno, he longs for the old days of sailing the wide world etc.

Anyway, Ragnar and Ivarr arrive in Winchester only to find out that Ecbert isn’t home, the one thing they were not counting on. Aethelwulf does what Aethelwulf does and has them locked up. Aslaug gets one of yer Viking funerals that everyone loves so much while Lagertha gloats. Ecbert comes home and gets Ragnar out of the dungeons to do some devious Ecbert stuff with him. Young Magnus shows up for the first time in his older version, and Ragnar says he never had sex with whatsername, which messes things up a little. There are a lot of children of dubious parentage at the West Saxon court, aren’t there?  Anyway, Ecbert has a good old jaw with Ragnar about the absurdity of religion or destiny or something, or maybe just their shared love for Athelstan. Ragnar sets up his plan to introduce — dare I say it? — the main plot of the series! And only 40-whatever episodes in.

This show has a real problem with deviousness, which I think is a combination of budget concerns and the influence of Game of Thrones. See, in Game of Thrones, everyone is always going into negotiations with uncertain allies and then getting assassinated. This is because the setting of Game of Thrones is a functional medieval society that is now falling apart. So people keep relying on outmoded concepts of law or political influence to protect them and discovering that they no longer apply, while a new breed of bastard and/or hero thrives.

But we’re supposed to believe that this is pretty much how things work in Vikings. And logically, all the characters should know that. That being the case, why doesn’t anyone act like it? Lagertha makes a peace agreement with Aslaug — who is, remember, widely believed to be descended from a literal god — and then shoots her in the back as she walks away. In front of everyone! That has got to be a blow to her reputation, surely.

(Does that mean that when Aslaug was sleeping with Harbard she was having sex with her own grandfather? Ick.)

Anyhow, my point is — given that Ubbe and Sigurd presumably know that anyone could turn on you at any time, why would they just walk into a trap like a couple of idiots? If Aslaug knows (and remember, she’s supposed to be the politically savvy one) that Lagertha, a famous general with a full-sized army, can march into her town without anyone knowing until she’s forming a shieldwall at the city limits, then why on earth would she allow Bjorn to sail off with all the warriors? (Unless Bjorn’s in on it, of course, which would be kind of neat, but still.) Over and over, this show sets up a political dispute and then has it resolved by someone getting knifed in ways that make dramatic sense but little real-world sense.

Now, I’m not saying people don’t get assassinated or massacred in real life. But successful assassinations and massacres as means of ending conflicts are probably quite rare. Usually killing one guy or even one group of guys doesn’t solve the problem like you’d hope it would. Whack a Viking warlord, and you may find that they have uncles, cousins, brothers, followers, whatever, who will come back to haunt you. Those people (usually) don’t exist in this show because of principles of narrative economy, but I dunno, it feels like a cheat. I’m aware I’ve said this before.

So Narcos is this show Netflix keeps trying to push as some kind of big prestige drama, but nobody I know seems to be watching it. I thought I’d give it a spin, since these days shows set in the 80s and early 90s are historical shows. And it’s … interesting.

It’s a bold move, frankly, and I’d be interested to know more about why Netflix decided to make it the way they did — are they pushing into Spanish-speaking markets? Because, I mean, this thing doesn’t have anyone really famous in it, and about two thirds of it is in Spanish. Which makes sense, but it’s not exactly a formula for success in the Anglophone world.

It’s a dramatisation, not a historical retelling, and it’s up-front about that fact. Some of the characters are real, but others are fictitious or based on real people. So the reporter, Valeria Velez, is based on a real reporter, Virginia Vallejo, but their fates are very different between the show and real life. Similarly, Colonel Carrillo from the first part of the show is fictitious, while the guy who replaces him, Colonel Martinez, was real.

There’s an American POV character who is treated like the hero of the story to begin with but whose importance declines as it goes on; he kind of reminds me of Marco in Marco Polo, the increasingly unnecessary point of viewer identification. But the main attraction is clearly Wagner Moura as Pablo Escobar, and he’s good. 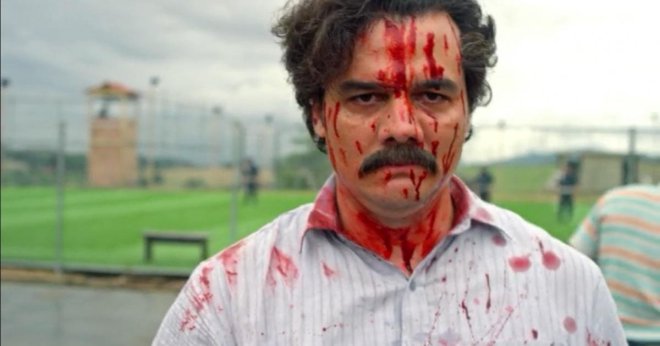 Its most obvious model is The Wire — a crime drama that’s really an exploration of a particular setting built up of many small strands — and like that show it also succeeds in evoking a look and feel in a way that’s impressive (I mean, I wasn’t in Colombia in the 80s, but this feels like it could be what that looked like).

It also showcases some of the flaws in historical storytelling on television, especially in the contrast between its first and second seasons. The second season covers a year or two in which the cops, rival drug cartels and paramilitaries are all hunting for Escobar after he escapes from jail. It’s a relatively short period of time with a cast of characters many (though not all) of whom were developed in the first season, and it’s compelling. But it comes at the expense of a first season that covers over a decade of history and has to introduce almost all of those characters. As a result, the first season feels a little more disjointed and grab-baggy. It has a lot of great scenes and performances, but it’s the weaker of the two — which is a shame, since it’s the first one people will see.

Anyway, it’s definitely worth watching as long as you either don’t mind giving a show your full attention or speak Spanish.

After a long hiatus, Vikings Season 4 returns. Can I … before we start, can anyone explain to me in what sense this is not Season 5? It’s as long as a normal season, it has the schedule of a normal season, and it’s way more different from Season 4 than Season 4 was from Season 3. I mean, I don’t really care, I just don’t understand.

Anyway, when last we left our cast, Ragnar had been spending some time at the Old Friends Senior Dog Sanctuary but had finally returned to grumble at the replacement cast of characters and act all whimsical, only now with a sense of regret. He’s also catching up with the viewers in terms of the knowledge that he’s going to die. I do like the way Sexy Fimmel of Season 1 has turned into Looks Like an Old Leather Couch Owned By a Family With Dogs Fimmel in just a few short years. I’m sure Actual Fimmel remains a fine figure of a man, but he must be spending longer and longer in that makeup chair every season.

Meanwhile, the young Ragnarssons are doing their patented line in being everything from Not That Much of a Bastard (Ubbe) to Your Average Level of Bastard (Sigurd) to Rotten Little Bastard (Ivarr). I have to say that for all he used to be Action Hero Dude, Bjorn is pretty good in this. Alexander Ludwig does this thing where he mimics Ragnar’s body language, and it’s clever.

What else, what else? Season 4 ended with a savage purge of extraneous plotlines, killing off Whatsername, the other Whatsername, her brother Whatsername’s Brother, and probably some English people too. This season continues the trend by, for a miracle, confining its action only to the towering peaks and rocky fjords of … southern Denmark. No Wessex, no Paris, no those two Norwegian guys, no nothing. Which is fair enough; with five or six new characters to introduce (the girls get pretty short shrift here, so I don’t know if they’re going to be recurring) it would be ridiculous to go back to the other plotlines.

Now, I don’t know if this means that the show has decided to stop trying to be Game of Thrones and go back to trying to be Sons of Anarchy, or if they’re just easing us back in to the upcoming Alfred the Great plotline one step at a time. I would like to see Rollo again, but it’s hard to imagine how other than Bjorn’s side plot.

Sexy Sexy Murder Alert: I was pleased to see that Ivarr didn’t kill the blonde girl (Margret?), which I was assuming would be his Rotten Little Bastard characterisation moment. Instead, he has a good old cry and she comforts him, which is a pretty kind way to treat someone who was trying to strangle you a moment ago. I hope that this is just her trying to survive in a tough situation rather than genuine empathy. Maybe she was just sleeping with all the brothers until she found the one she could manipulate? Frankly I hope she becomes his psycho Lady Macbeth character; we need more female political characters now that Aslaug seems not to be doing much. Well, it’s early days yet.

So yeah: I like the new kids, all brittle and insecure and dangerous, I like Lagertha being all stately with posh hair, it would be nice to see a little more … narrative economy this season and it looks like we might get that. There isn’t much history-lesson stuff in this episode, which means there isn’t much totally risible history, so that’s nice.