Alfred Duggan is someone I should talk about more on this blog, honestly.

But the romance and the sorta-kinda heroism and the just general … accomplishments of Bohemond make him the kind of character you can admire, like a pirate, while not actually wanting to ever go anywhere near him. He was more like Hannibal Lecter than Dirk Dauntless, I imagine.

That is the kind of historical character I get fixated on a bit sometimes: undeniably a thug and a bully, and undeniably someone who lived his life in a way that is, to put it mildly, hard for me to empathize with. But somehow impressive nonetheless.

But that style of historical violence addict can sometimes go too far even for me. Case in point: Baron von Ungern-Sternberg. Like most people who know about the Baron, he came to my attention when reading one of Peter Hopkirk’s books about interwar Central Asia. But I really got into him when my friend James Palmer published a biography of him.

I’m not going to spoil the book — you should read it — but suffice it to say that Ungern-Sternberg was a combination of eccentric and just utterly horrible. He was a Westerner fascinated by Buddhism, and there’s nothing too unusual about that, but the form his took was a little different from your typical spiritual seeker. Like, for instance, he got very enthusiastic about the idea of restoring the Bogd Khan — the traditional monarch — in Mongolia, as part of some kind of mystical monarchist thing.  His particular brand of murderous bloodthirstiness went well with Mongolia’s demon-haunted mixture of Buddhism and traditional beliefs. He adopted a sort of Genghis Khan-type personality and may or may not have been referred to as the “God of war.” He was also a fierce anti-Semite. And I mean an anti-Semite even by the standards of a Russian aristocrat in 1920.

In any event, he set up as a warlord in Central Asia during the Russian Civil War, nominally part of the White army but in effect answering to no one but the voices in his head. He used to feed people to wolves and so on. 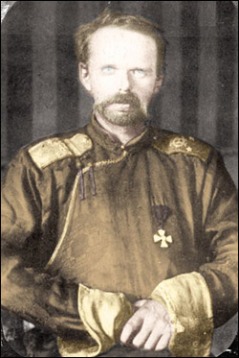 Not a guy you’d want to meet in a dark alley; he has sheep killer eyes. Or, to be more accurate, burn-you-alive eyes, or make-you-climb-a-tree-and-stay-there-all-night-and-shoot-you-when-you-fall-out eyes.

Like most real psycho tyrants, he didn’t last. He was captured by the reds and shot. Somehow, his policies of beating people to death with sticks or conscripting random strangers into his horde failed to endear him to his own troops, who tried to kill him.

He’s turned up in a few novels and games as a villain, but doesn’t seem to have the cultural penetration you’d expect from a legendary maniac. It’s probably because his mania was in the context of the Russian Civil War, something not a lot of us care about. But he’s worth a look if you like psychotic mass murderers with outrageous wardrobes.

If you are not thinking about your CV right now and feeling a little down, you are very unlike me. 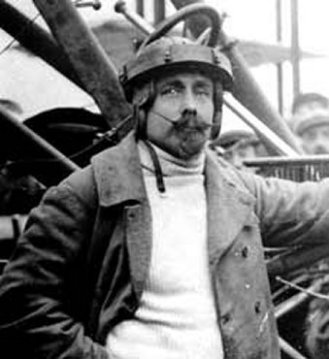 Look at those whiskers!

Samuel F. Cody (not his real name) is a fantastic instance of the Everyone’s a Fucking Loony Principle, which basically states that whenever you start to investigate people’s backstories — especially in any kind of “fringe” area — you will find out that they are totally bizarre. In turn-of-the-century Britain, that applied to heavier-than-air flight, which was a new field and still open to characters like “Colonel” Cody, who embody that combination of rock star and crackpot that we love so much here at the GHP.

I first came across old S.F. in 2003 or so when I found a copy of Garry Jenkins’s book on him in Galloway and Porter. O Galloway and Porter, how we mourn you. Anyway, there is a more recent book out on him now, The Flying Cowboy. I have not yet read it, but I intend to.

My favourite thing about Cody — and it is hard to choose — is that he went to the trouble of getting his “son,” Leon Cody, British citizenship. I say “son” because a) Leon was Mrs Cody’s son by a previous marriage, and b) S.F. and Mrs Cody weren’t really married at all — she was his common-law wife, but he had an existing wife elsewhere. So Cody went through the process of getting Leon British citizenship despite the fact that Leon was British in order to keep up the front. That’s commitment, and I appreciate commitment.

Don’t forget that the banner design competition is still going! Entries are due next Friday and I will be packing up the prize bags some time this weekend.

The Everyone’s a Fucking Loony Principle

An upcoming conference in London, about which more in a bit, has got me thinking about earlier talks I gave which relate to H.P. Lovecraft, history and archaeology. The link I posted below to the Treadwell’s one is expired, but I will see if I can find it again. However, I also appeared on an episode of the H.P. Lovecraft Literary Podcast (“H.P. Podcraft” to its friends) talking about The History of the Necronomicon and Ibid. The interesting thing to me about these minor works of Lovecraft’s is the way he manages to adopt the style and jargon of historians (different in those days, of course) to give his work an air of being authenticity. In fact, Lovecraft famously said that in a story with fantastic elements the other elements have to be totally realistic — have to be handled as if they were a hoax.

I wondered if this were not tangentially related to the work of former Cambridge colleague Tera Pruitt, whose web presence I am not able to find with lazy searching but whose work should be required reading for anyone interested in pseudoarchaeology. You can check out her Master’s thesis here, but there’s probably more out there, and if I find it I shall promote it. Basically, one of the things she noticed about pseudoarchaeology was its tendency to appropriate aspects of actual archaeology, in terms of its language, its organisations, its structures … everything but the actual archaeology, of course. Frustrating for archaeologists but fun for Forteans.

Now, maybe Cornelius Holtorf, in one of his bomb-lobbing archaeology/pop-culture treatises, would say that this isn’t a perversion of the system — this is the system. Me personally, I would not agree, but I can sort of see where he’s coming from. Sometimes what’s really important — and this is certainly the case when we’re talking about Lovecraft and history — isn’t what you say but how you say it.

I never explain this stuff clearly, and I’m not sure I have now.