It’s a Syfy original starring the guy from the Highlander TV show. Clearly it’s going to be the best evocaiton of the career of the great Elizabethan sea dog ever, right?

So, obviously this film is garbage, and obviously it bears no relationship to history, unless there was an incident in 1592 that I don’t know about in which Francis Drake’s nonexistent daughter was kidnapped to force him into seeking the mysterious Tree of Life, sending him on a journey guided by a map drawn by Plato during which he gets attacked by giant lobsters and things.

Oddly, there are constant references to things the actual Drake did, like getting trapped by the Spanish at San Juan de Ulua or sacking Cadiz. It’s basically sort of like Abraham Lincoln, Vampire Hunter. Not that there isn’t a long and rich history of completely fanciful adventure stories starring real pirates, of course.

It’s garbage, you’ll be shocked to learn — cheap, clumsy, half-assed fights, ropey CGI, silly dialogue, about six guys in the crew of the ship, the whole bit. But it has a lot of surprising good points.

I quite like to think that the giant lobster attack is inspired by historical maps:

Also, Paul plays as a preening glory hound, the kind of guy who stands heroically in a boat with his cape flowing behind him when his crew are trying to row sneakily into a harbour. And plays him with a West Country accent, which makes his tough-guy lines unintentionally(?) hilarious.

There’s a lot of reference to medieval lore, like the search for the earthly Paradise and a bit where the sailors get themselves a rooster as a method of dealing with a (terrible CGI) basilisk. Doesn’t work, sadly.

They even drag in Norse mythology,shoehorning in a dodgy CGI Jormungandr.

Also, Temuera Morrison continues the downward trajectory by playing the baddie in this movie.

It’s not good by any stretch of the definition, but the first half is a pretty cheery piece of dim pirate adventure. By about 2/3 of the way through, however, it has conclusively worn out its welcome.

I went to Oxford on a little weekend trip with my wife, and we saw some history things:

We went to the Ashmolean, as one does:

But for me, of course, the highlight of the trip was the Pitt Rivers Museum. It is as it was the last time I was there:

I like all the crazy business they have in there, but there’s a sense in which it’s not quite what a modern museum person would create. A lot of it is thematically-linked, and often in kind of odd ways. So there’ll be a cabinet on “the animal form in art,” or “axes,” or “naval models,” or whatever, and then it’ll have all kinds of stuff from all different parts of the world that shares that theme. So you goggle at the shrunken heads or the elf arrows or whatever, but maybe you don’t actually learn a lot about any of those individual things in their context.

I suppose that if what you want visitors to the museum to get is a bunch of knowledge about a particular culture or period, that’s an issue. But I do think that the old-timey displays of the Pitt Rivers do two very valuable things:

First, they don’t pretend that artefacts grow in museums. The fact that these things have a history within the museum is there for everyone to see; indeed, in some cases the original labels are on there, now historical artefacts themselves. 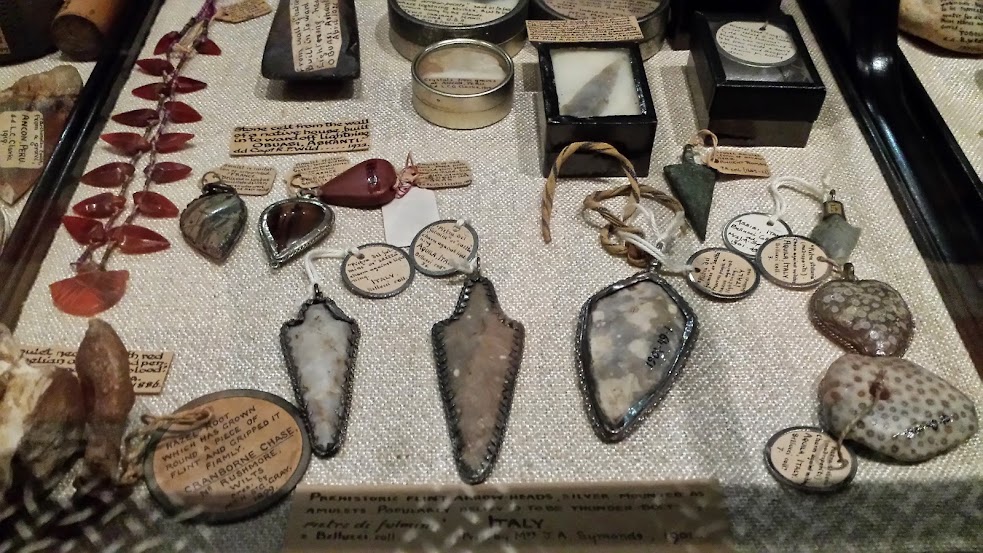 The other thing that I think is important is the element of cross-cultural diversity. For example, the section on “body modification” (or body ornament or whatever) has all kind of stuff from lots of different cultures — including a European corset. Even if you don’t learn anything specific about modern or historical cultures, one of the most important lessons you can learn from studying history or archaeology is a sense of skepticism toward the “normality” of your own culture. First you realise that your ancestors were weirdos and that nothing they did made any sense, but then you realise that you too are a weirdo and that nothing you do makes any sense. And then I don’t know. Perhaps you become enlightened.

I guess what I mean is that this approach shows some things that are the same across many cultures, but also a lot of things that are different. And ideally what that teaches is more than just some Victorian “look, Mrs Mortsafe, the headdress of a Feejee chief. How excessively diverting!” “Most diverting, Mr Mortsafe” type of thing, but an appreciation for the weirdness that’s out there.

Anyway, I had a good time. Inexplicably, the gift shop is full of Egyptian stuff.