Right; I promised I would talk about gaming, so here it is. (I generally talk about gaming on my gaming blog.) Today we’re going to talk a little about historical themes in Warhammer 40,000 and its various derivatives. Now, if you have ever played this game, or are familiar with its art and design, you’ll know that it tends to be covered in little Gothic flourishes — or, to be less charitable, that everything is made out of cathedrals. 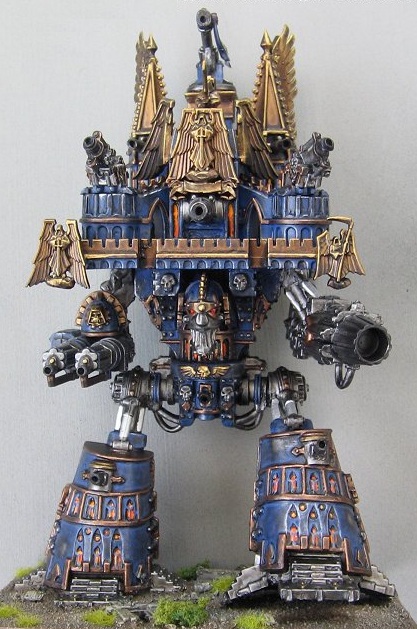 Now, I remember when I was in high school I really didn’t like how everything in the 40K universe was encrusted with skulls and spires, but over the years I’ve come to appreciate it a bit more. Let me begin at the beginning: it’s obvious that the first edition of Warhammer 40,000 was a stew of many different influences. The most obvious of these is 2000 AD: you can see Judge Dredd, Strontium Dog, Rogue Trooper and Nemesis the Warlock in its genes very easily. There are also a lot of other connections — Dune, obviously, Michael Moorcock, The Road Warrior, and earlier games like Laserburn and Dungeons and Dragons, not to mention the then-still-inchoate Warhammer Fantasy Battle setting. The Realm of Zhu has done some amazing work on tracing artistic inspiration in the Warhammer Fantasy Battle game. It also drew a lot of its inspiration from history. That’s no surprise: as this interview with Rick Priestley points out, several of the members of the Design Studio during the classic era had backgrounds in archaeology. (In fact, during my recent trip to the British Museum, I saw this book by GW and TSR alumnus/archaeology guy Graeme Davis, who also wrote the AD&D Vikings book [EDIT: whoops! He did the Celts one], in the gift shop. (Big hat tip to Orlygg for making me think about this stuff.) Now, in the 1990s, the design of the various aspects of the 40K setting took on explicitly historical models. For instance, the Ultramarines are pretty heavily modelled on Romans: 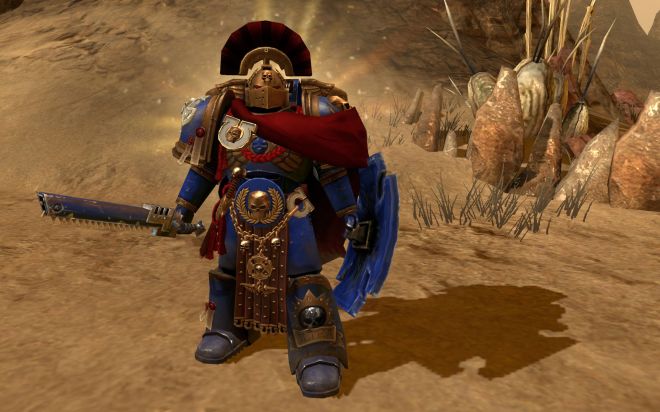 While the Valhallan Ice Warriors are pretty obviously modelled on the Red Army of the Second World War: 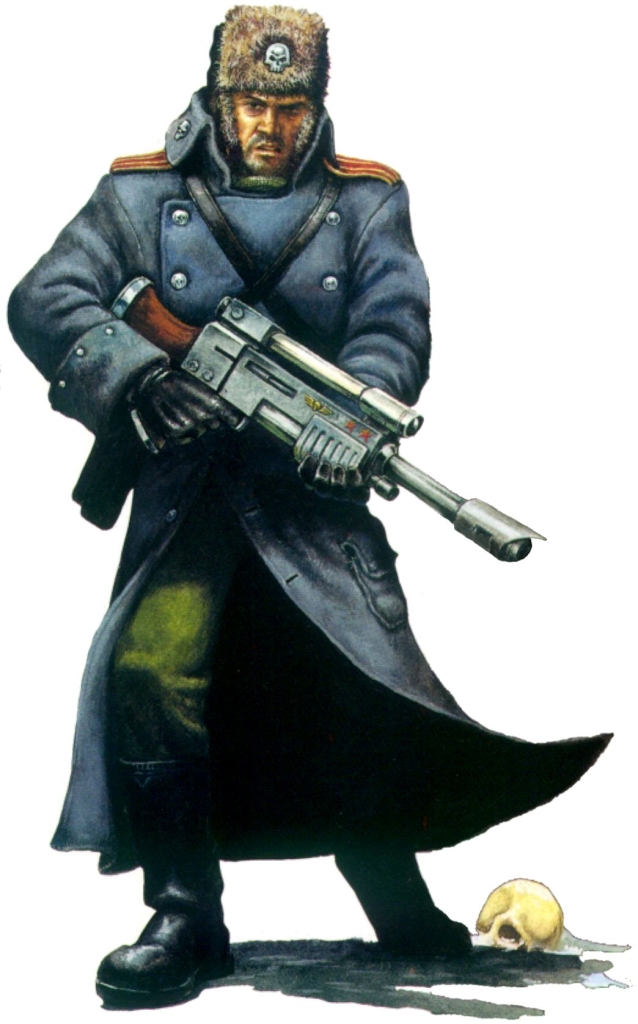 But these aren’t the historical references I’m talking about, really. The early historical references are a bit messier, a bit more … playful, maybe? I think the best-known of these is probably the Dark Angels chapter. The Dark Angels were founded by a godlike being called a Primarch — this particular Primarch is variously called Lyyn Elgonsen, Lynol Jonsen, or (currently) LionEl’Jonson. 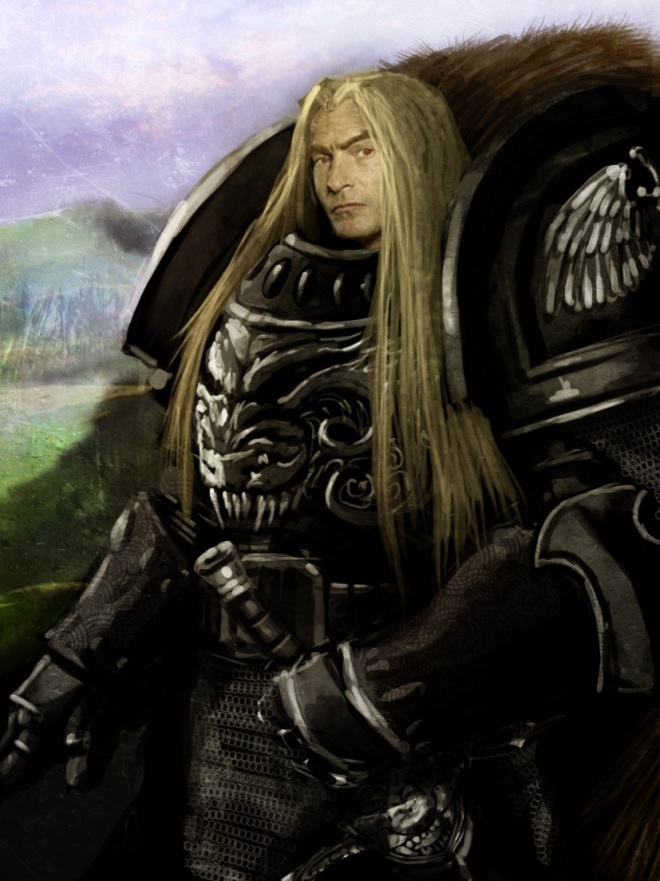 All of which are, of course, just ways of spelling “Lionel Johnson,” a 19th-century English poet who did all the usual 19th-century English poet stuff: repressed his homosexuality, converted to Catholicism, was Alfred Douglas’s cousin. His most famous poem is “The Dark Angel,” which seems to be mainly about fighting against temptation. Now, I don’t think this was part of a plan — I think the people compiling these books were well-read people, and when they needed to come up with the leaders of their chapters, they threw in a couple of literary and historical references (see also: Jaghatai Khan, Konrad Curze, Perturabo). It was only later that some people came along with a (perceived, anyway) mandate to systematise. But whether early throwaway references or later systematic exploration, I think both “generations” of 40K have this in coming: the setting is weighed down by its history. I think this aesthetic is not uncommon in British sci-fi of the 1980s. Consider this excellent article by Chris Sims about Judge Dredd’s costume. I think it’s all worth reading (I’m a fan), but here’s the key point:

Judge Dredd exists in the world of Thrillpower, the far-off future year of 2099 AD, in a society where every single thing has become monstrously overwhelming. Just the very idea of Mega City One, this towering post-nuclear metropolis that’s built on overcrowding and stuffing as many people into the only tiny space that can actually support life? That’s the core idea of Judge Dredd, and when Pat Mills, John Wagner and Carlos Ezquerra created him, they made sure to weave that into the fabric of those stories. There’s a good reason that one of the first ideas that comes up in a Judge Dredd story, once they’ve established this massive, teeming, crushing society where the fascists are the good guys, is the “futsies,” people suffering from “future shock” who just snap under the pressure of living there. Life in the future is just too much for people.

And that idea of too much is present in the art of 40K. Everything is covered in skulls, everything is a mile tall, everything is ten thousand years old or hungers for all life or iz kuvvad in Orky know-wotz — everything is just way too much to endure and stay sane. It’s a world where these are the good guys:

Nothing in the 40K universe should be “efficient” without having “brutally” on there first. Even the Eldar, who are meant to be all lithe and elegant, are covered in trinkets and greeblies, literally encrusted with the souls of their dead ancestors, persistent reminders of the tragedy of their species. (This is why the Tau, a late addition to the canon, sit so uneasily with the rest of it.) I think this is a very interesting contrast to a lot of “classic” science fiction. A lot of the tradition of sci-fi art shows images that are clean and futuristic without a whole lot of visible past-ness: 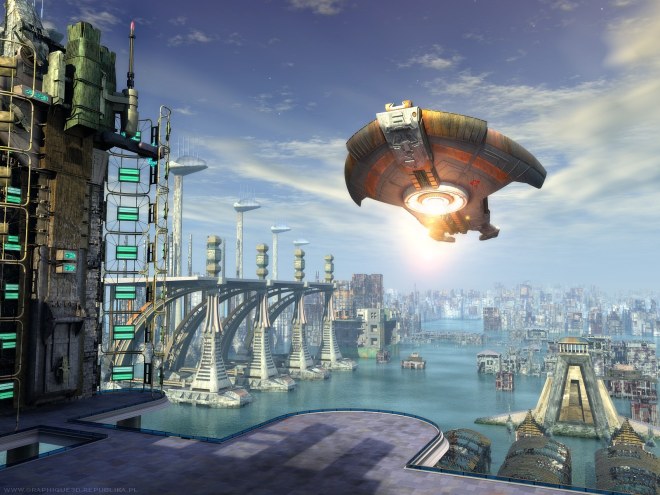 You know the kind of thing. Now obviously that’s not all science fiction art, but I think there’s an identifiable trend where the future is often portrayed without a past. But the 40K future is all about the past. Partly it’s about our past — although it’s the future, it’s decidedly primitive, with swords and whatnot. It uses the images of our past, but in romantic ways: so the Dark Angels, for example, aren’t medieval-like in their modern incarnation: they’re Gothic, using images of medieval monks and knights to create a moody, mournful aesthetic that doesn’t actually resemble the middle ages at all.

(This is a new-ish look for them, but it’s been developing for well over a decade). I think this is a pretty interesting use of historical imagery: as a source of weird greeblies to cover every visible surface with. It creates this impression of the 40K setting as somewhere that’s almost rotten with history, encrusted with meaningless and cruel legacies from some forgotten era.

And it’s interesting to me that as the setting’s been developed, it’s become more and more specifically obsessed with its own history — going back and mapping out every nook and cranny of the Horus Heresy, for instance, in an endless series of commentaries and footnotes on books written 25 years ago. If you want to consider this view of history something that very specifically comes out of Britain in the 80s, I wouldn’t argue with you. I certainly think that the fusion of the Gothic and the modern would come much easier to someone who lived in London or even Cambridge; I have referred in the past to the place in the New Museums Site where I used to work as “Necromunda.” To summarise, then:

The Weight of History in Warhammer 40,000