Noticing that it used an image of Kirk Douglas’s gristly horror-mug from 1958 rapefest The Vikings, friend of the blog Ian pointed toward this article about how things about Vikings are making a comeback and also about how the concept of the Vikings displayed in many of said things is basically one from 19th-century art and literature. Which is mostly true, I think.

Actually, I thought the interesting thing about Pathfinder was that it portrayed the Vikings as just flat-out no-fucking-around bad guys, and you can see the same in recent films from Poland and Russia (well, recently released over here, anyway) where the romantic Viking national myth must be scorned in favour of some other romantic national myth.

But yeah, the 19th century. Was there anything it couldn’t screw up? If, when I say “Anglo-Saxons” the image that comes to mind is of some stipply black-and-white picture of guys with trailing moustaches under some kind of oak tree, you can blame the 19th century for that. Hell, you can blame Hegel specifically if you like. Or the brothers Grimm.

You think I’m exaggerating, but you are mistaken. This is the kind of crap I’m talking about: 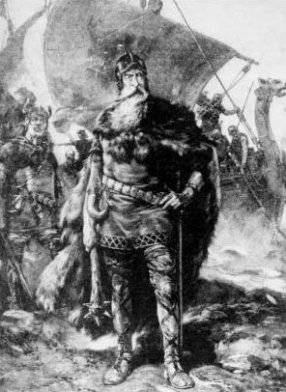 It’s not the stupid hat and the stupid club that I’m concerned about. Oh no. It’s the noble gaze, fixed on some far horizon with new conquests and strange new …

… sorry, I died for a moment there.

But it’s true that the whole sort of romantic Viking image comes more or less straight from the 19th century — it was a time of national movements all over northern Europe, and part of that was people from Germany and Scandinavia trying to find some kind of roots for their culture that didn’t make them feel inferior to the people from southern Europe with the big tall buildings.

You remember how well that ended. But long before the whole murdering aspect of it there was a more harmless putting-on-silly-hats and cultivating-ludicrous-moustaches aspect. Some things were done in the name of folklore that were good. For instance, Elias Lennrot copied down and/or made up the Kalevala, and without that we’d never have had The Day the Earth Froze.

Seriously, 19th-century nationalism brought a lot of literature, history and art into the spotlight that had previously been neglected. It’s doubtful whether my own old field of Anglo-Saxon studies would exist in its present form without sententious Victorian patriots. But on the other hand it’s hard to forgive the cultural legacy that even today dogs the whole subject.

There’s going to come some time when I snap and decide I love Viking metal. But that time is not now.

19th Century Folklorists Have A Lot to Answer For: 2