This summer, my wife and I celebrated our anniversary by (among other things) going to the Pompeii exhibit at the British Museum, which I recommend seeing if you haven’t. While there we also picked up a little book on some of their mummy portraits.

Now, these aren’t the mummies you’re probably thinking of, with the impassive gold faces and whatnot. These portraits are from the Roman period, and they’re much more naturalistic, very much in the Greco-Roman idiom. This sort of thing fascinates me — it’s an example of a way in which both Hellenistic cultural elements and much older traditional Egyptian ones are blending to create a distinct new thing. I love that stuff.

Some of these portraits are hauntingly personal: 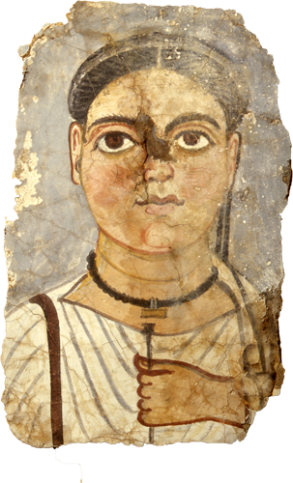 I think it’s the middle one that gets me the most. You can tell it’s of a specific person rather than an idealised formula, someone who was known and cared for and missed and whose legacy is that art scholars talk about how crude her portrait is compared to the pretty girl at the top of the page. I know it’s wrong to project modern emotions onto the past blah blah _blah_ but remember what I said about using the bullshit you have to hand to cope with the worst feeling you’ll ever have? This is the thought that keeps coming back to me, the Roman-Egyptian equivalent of some humiliating conversation in a funeral director’s office where you have to try to make whatever coins you happen to have match this godawful grief and just pile the bitter indignity of being poor on top of the kick in the heart of losing someone you love.

But what the hell do I know? Maybe they thought that was a _bitchin’_ mummy portrait. Maybe that was just what they wanted. Maybe that wasn’t their artistic tradition. The hand holding the flower looks like some older Egyptian representations of hands; maybe it was just customarily rustic. I like to think so.

Mummy portraits are sad and lovely