You may recall Mr Glibberie, vicar of Halstead, castigated by some 16th-century Puritans as “a verie ridiculous preacher.” I mentioned him in an earlier Invective Through the Ages post. At the time, I wondered if there were any other information out there on poor Mr Glibberie. I’m sure — I hope — that buried in some archive somewhere there is more mention of poor old Glibberie, but I’m sorry to say that on Google there is only his identification as “verie ridiculous”. He’s even in Elton’s The Tudor Constitution, the poor pitiful bastard. There’s your afterlife, Glibberie. 430 years later, that’s your two words: “verie ridiculous.” Still, that’s two words more than most of us. They could have been “notorious murderer,” I guess, but even then murderers have some dignity.

Are you familiar with the case of Dean Mahomed? He opened the first curry house in England, the Hindoostanee Coffee House, which is definitely a thing. We all have a lot to thank him for. I mean, I’m sure that if it hadn’t been him, it would have been somebody else, but it’s pleasant to think of this Bengali immigrant running a curry house in London in 1810. Here he is around then, looking the picture of Georgian prosperity. 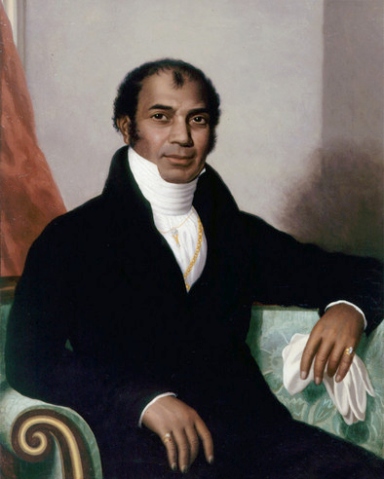 The restaurant folded, sadly, but the seed, I like to think, was sown. There’s a plaque on the site now.

Dean Mahomed is famous not only for introducing both curry and shampooing (although he used the term to mean head massage) to Britain but also for being the first Indian author to write a book in English. Anybody will tell you that. What they won’t tell you is that it’s incredibly dull.

Think about it! Here’s this guy, Sake Dean Mahomed, and from his youth in Bengal he joins the army as a servant and then goes to all sorts of places — to Ireland, to Britain — at a time when that was pretty rare. He pioneers one of Britain’s best-loved culinary delights, he’s clearly a hell of a guy, and what kind of book does he write?

In a few months after our arrival, the Nabob Aspa-doulah, in consequence of a difference with the Fouzdars Maboub and Cossi-bussant, arising from their non-compliance to pay the usual annual tribute, due for some time, collected his troops together, in order to march against them, having first dispatched an express to General Stibber, who commanded our army, acquainting him of his intended expedition, and requesting his immediate assistance.

Now, I like a long sentence as much as the next guy, but really. And there’s exciting stuff happening — travels to new places, plots, poisonings, storms, wars, I don’t know — but the whole thing is just a bit … it’s 19th-century and not in that fun overstuffed way.

Whatever. These two thoughts have nothing to do with each other, but the two books are close to one another on my shelf. Dean Mahomed was a cool dude and it is good that we are now more aware of his contribution to our culture. Mr Glibberie was probably a shithead, but you never know. Puritans didn’t like all sorts of people.

I will try to have something a little more contentful tomorrow, or at the very least on Thursday.