You remember when I said that Movie Monday was going to be about movies that were allegedly based on historical events? I lied. There comes a time when it’s one-thirty in the morning and you’re staring dully at a Steve Reeves movie about the Battle of Marathon that you have to ask yourself what you’re doing with your life. (Mind you, it might still be on next week.) 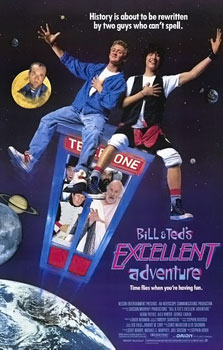 And if you are interested in some nostalgia (or, what the hell is wrong with you, haven’t seen it) you can follow along here:

First, a personal note. I was 11 and living in California in 1989, so some aspects of this film are very familiar to me, although I lived in Northern California, not Southern California where the movie is set. In fact, to begin with I wasn’t aware that the way the two main characters talked was meant to be funny, because every guy I went to school with talked like that. (Not every, but enough.) In fact, this may very well just have meant that all my school friends had seen the movie before I had and were imitating it; I am pretty sure I only saw it later on television or video, although it can’t have been that much later just judging by my memories of it.

Because Bill and Ted are charmed fools, watched out for by a benevolent time-traveller, Rufus (George Carlin) and because their basic natures are free from vice, they actually do OK in history, where all good people they encounter know that they’re good. This plot device is rather like how Doctor Who works. And, in fact, as in Doctor Who, it sometimes seems that Bill and Ted don’t visit history, but movies — so, for instance, their trip to the Old West is really a trip to a Western: a saloon, a poker game, a bar fight, a chase and away. There are a few (but not many) little meta references in this bit, for instance:

There are also some clever little gags about the way that Bill and Ted study history — and not just that they’re oafs, but that their class is all focused on certain types of people. Like, the moment they arrive in medieval England, they run into a bunch of labouring serfs, look right at them and say “Excuse me! Do you know where there are any personages of historical significance around here?”

I’m a little concerned about Genghis Khan. On the one hand, he’s played by Al Leong, and I approve of movies that have Al Leong in them:

However, when they see Genghis Khan, he’s like eating a giant piece of chicken and groping a serving girl, and he is greeeezy. Now, I’m not denying that, it being the middle ages, Genghis Khan would have been greasy as hell by modern standards. But everyone else in this film is nice and clean, so why is Genghis so foul? And why does he have a big-ass comedy barbarian club? They lure him with a Twinkie, and he goes grunting and panting after them. Hmmm.

Still, I love this movie. I mean, it’s stupid as hell, but it’s a little clever about how stupid it is. The bit where the guys try to pretend that the visiting historical personages are just their friends (“uh … Maxine of Arc … Herman the Kid … Bob Genghiskhan … So-crates Johnson, Dennis Frood, and, uh … Abraham Lincoln”) and Missy just smiles and nods is great. Likewise the fact that they consistently treat “The Kid” and “of Arc” as if they were those characters’ last names.

I think what I wasn’t prepared for watching this was how much of a period piece it is itself. Obviously, the gag is “historical people in the modern day / modern people in history” but this movie’s “modern day” is 25 years ago, and it’s very, very of its time. There’s a big aerobics scene, Missy has one of those headset radios, the band references, of course … it’s set around a culture whose defining locations are the mall and the water park. It is very late-80s. So there’s an added weird feeling of detachment, like this movie that is full of jokes about history and modernity is now about history and history. Which I guess is the fate of all such documents; no one thinks A Connecticut Yankee is like a scathing satire of modern mores or whatever.