So, I was in London last week visiting my mother, who was in town, so my wife and I went with her and some family friends to see the Magna Carta: Law, Liberty, Legacy exhibit at the British Library. I have written about previous trips to the British Library and said that I found them sometimes good, other times less satisfying. But this one is right in the BL’s comfort zone, and it shows. 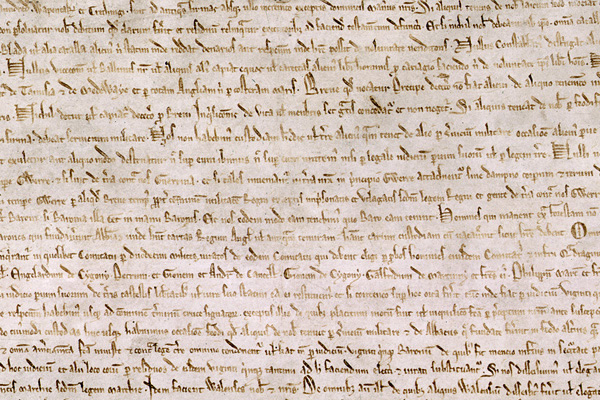 Magna Carta — it’s reassuring to see that Bill Clinton, in his video for this exhibit, also says the Magna Carta — is one of those documents where the thing itself is not as important as its perception. And both the thing itself and the records of its reception are in the British Library in heaps. So there’s not only the original documents — saved until the end — but lots of legal or other documents to give them context and then a bunch of stuff about people’s reactions to the document. That includes both the work of later legal scholars and the popular response to the document. If I were clever, I’d say that it includes both John Hancock and Tony Hancock:

Again, the interesting thing here is basically that the myth of Magna Carta is so potent that its actual importance is secondary. It’s not a statement of guiding principle like the Declaration of Independence, it’s not a living legal document like the Constitution — and the exhibit acknowledges that, even including videos from legal scholars who point out that the document doesn’t have the importance people ascribe to it. And yet, the hype over the 800th anniversary meant that there was no way the BL was getting away without doing something to mark it.

And, you know, that’s kind of what I like about it. Like, this is a document that emerged from the mess of a particular historical situation. It was never intended to be a national symbol; it just sort of worked out that way. And that, in itself, is a pretty good symbol of British (well, OK, English) constitutional history.