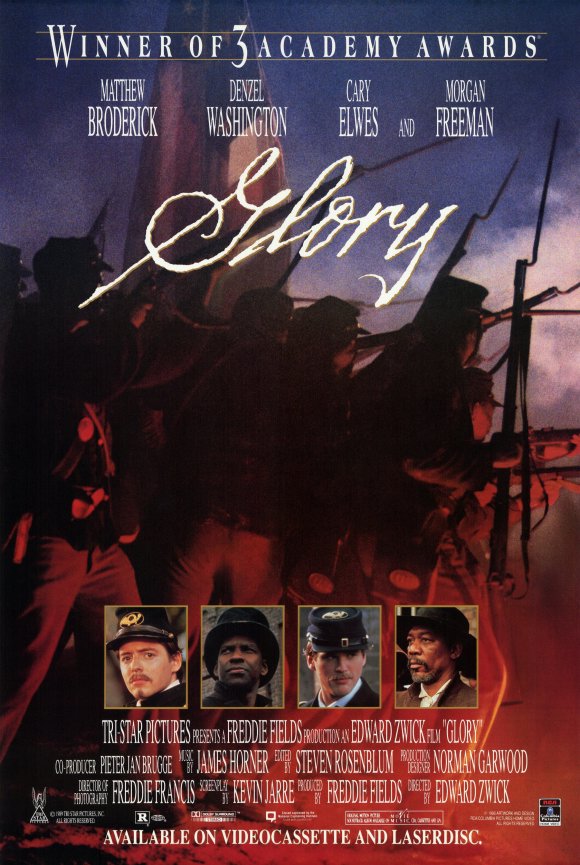 A recent stock-up of historical films on Amazon.co.uk reminded me that I had meant to write about Glory back when I was reading another officer’s memoirs in late 2013, but couldn’t find it online. So while doing some other work today, I rewatched it.

Now obviously, this isn’t the kind of historical howler that I usually watch; it’s both a good film and reeeeeeeeasonably good history. So I’m going to assume that you know that it sticks mostly pretty close to the story of the life of Colonel Robert Gould Shaw and tells the story of the 54th Regiment, Massachusetts Volunteer Infantry. Mostly. Rather than dissecting the film’s narrative, I want to talk about some points that occurred to me while watching it.

1. Frederick Douglass. When I saw the Sedgwick Museum of Earth Science’s Darwin display, I was struck by the image of a young Darwin — which is something we hardly see, apart from the occasional Paul Bettany. And I recently had reason to be talking to one of my students about Douglass and his writing, and so I was alert to the appearance of Iconic Frederick Douglass in this movie. Let me show you what I mean. Here’s Douglass as he appears in the film: 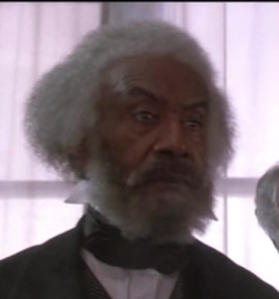 And here is the famous image of Douglass that he makes you think of: 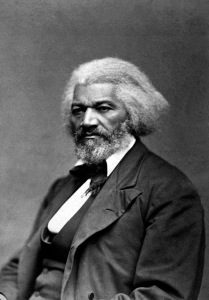 The problem is that that photograph of Douglass is from 1874, over a decade after the film is set. At the time of the scene in the film, Douglass had (probably) just turned 45. Does that dude look 45 to you? But if he didn’t look like that, he wouldn’t look like Frederick Douglass. Here’s a photo of Douglass from the 1860s: 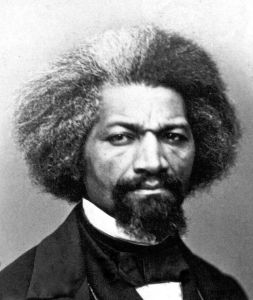 It’s a small point, but it’s just a revealing example of how a single image of a person usually looks “right” to us, despite the fact that obviously people’s appearances change throughout their lives.

2. Everybody is made up.

Shaw was a real person, of course, but almost all the other characters in the film who aren’t generals or reporters — that is, almost all of the black characters — are fictitious. Which is weird, because there were some quite famous people in the regiment, including two of Douglass’s sons, Lewis and Charles.

Glory ends with a tear-jerking version of the Second Battle of Fort Wagner, at which (spoilers for something that happened 150 years ago) Shaw is killed. Weirdly for a film that’s all about the heroic role of the black volunteers, this is the final note of the film. It’s kind of a downer; it isn’t even really a story of heroic sacrifice, because the assault in which everybody gets killed is unsuccessful.

But the death of Shaw, although always identified as a tragedy, is not particularly the end of the 54th’s story. They continued to serve throughout the war (although I don’t think they were in such a large battle again). But that’s what you get when you try to impose a narrative structure on historical stuff. You have to (or do you?) try to make it fit into a narrative structure it doesn’t always easily fit into. And, yeah, the narrative ends with the death of the white saviour. I think that’s a valid criticism, but this film isn’t a particularly egregious example of that. It is a little odd that the tale of African-Americans finally getting the chance to show their valour is — and some people would say must be — told mainly from the perspective of a white guy.

Oh, and the timeline is all compressed and mixed up. Like they show Shaw announcing that the Confederates have said they’ll execute black troops — but that happened months before the 54th were even formed. But that’s the usual thing where everything has to happen in the story.

So one thing that is interesting about the narratives of white officers in black regiments during the Civil War is that they respond to a stereotype about African-Americans that is no longer current. Today, racist images of African-Americans, especially young men, tend to portray them as thugs, given to violence and possessed of reckless, indomitable courage. The positive but patronising stereotype is of brave, tough black soldiers who are great infantry but lack leadership qualities. You always see a tough old black sergeant in movies, but seldom (although it’s changing) black fighter pilots or what have you. In the 1860s, however, this wasn’t the case at all. The stereotypical view of African-Americans was that, although they could be strong and sometimes dangerous, they lacked courage or discipline or whatever quality the speaker needed to give them to justify slavery. It was thought that they weren’t brave; that they wouldn’t fight. “They’re little children,” one of the characters in the film says.

So having African-American troops was a huge symbolic statement; if black people could fight, could be soldiers, they could be citizens; they weren’t by nature servile. I can’t say it any better than Ta-Nehisi Coates has done, but it’s interesting to see that portrayed in the film. I don’t think I registered that when I saw it as a kid (I watched it in junior high history class c. 1991, I believe). You could do worse than read pretty much everything Coates has ever written about the Civil War, by the way. He’s unflinching about things.

Now the reality is that racism changes things up on you in ways people don’t expect — because most of its details are rationalisations, not reasons. So the image of black people who could fight suddenly became, not the equals of brave, disciplined white soldiers, but scary brutes at worst and stoic peasants at best, and most of the people who were supposed to learn from their previous model of race being totally wrong just came up with ways to think around it and ignored the obvious dissonance. Because history is unbearably depressing sometimes. I guess I’m glad that was not in the film, because it would have been even more of a downer.

6. On the nose? Patronising?

I don’t know if I’m qualified to judge. Well, OK, definitely on the nose in places.

Anyway, with the caveats I mentioned, it’s pretty good — one of the few worthy, pious historical films that mostly holds up both as instructive material and as filmmaking. It has some moments of patriotic glurge, but the muddiness and the ambiguity of the ending serve to keep them in check.