Debates about the display of human(ish) remains in museums lead to … mur-der!

I know it’s not Tuesday, but it was when I watched Season 3, episode 15 of Grimm, the surprisingly good TV series about a cop hunting fairy-tale monsters in modern-day, er, Portland, and his wacky crew of friends and sidekicks. It’s a pretty shameless hybrid of Buffy and a police procedural, but it’s fun and, on this occasion, has an interesting archaeological twist. Spoilers follow.

Some workers discover an old crate which contains a sarcophagus which in turn contains a funny-looking Egyptian mummy; the mummy case resembles Anubis rather than a human figure, and the mummified body has a similar jackal-like head. 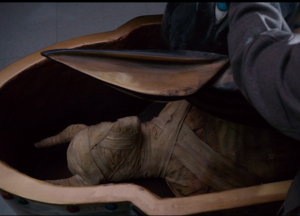 Some mysterious guys get outraged about this: 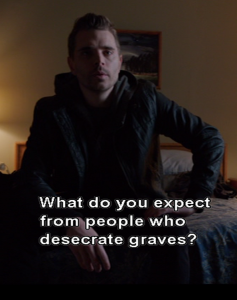 They break into the university where the mummy is being studied and leave menacing graffiti; when a security guard tries to stop them, there’s a brief exchange of gunfire and one of the guards is killed. This brings in our hero, Nick, who connects the jackal-headed body with the Wesen (magical beings who appear to commit 100% of all murders in Oregon) and asks his Wesen buddies, Monroe and Rosalee, to tell him if they know anything.

But unusually for these two character, Monroe and Rosalee are a bit ambivalent about it all. While they agree to help Nick catch the killer — one of a group of Wesen who try to protect Wesen cultural heritage — they are very unhappy about a Wesen body being in a museum, not just because they’re afraid it will jeopardise their security, but also because they consider it disrespectful.

In the end, they call in their own people, the Wesen Council, who have historically kind of been bad guys, and the Council cooperates uneasily with Nick. In the end, the killer is caught, hurrah hurrah, but Nick and his partner Hank let the Wesen get away with the mummy, which they cremate. And there’s a touching moment with sentimental music and so on, but Hank sounds a note of caution: 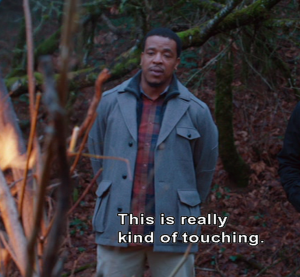 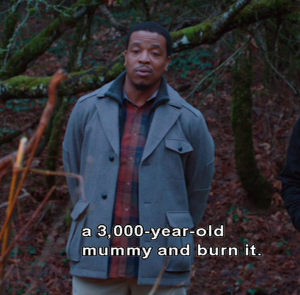 This is actually a pretty good, nuanced, balanced show about the competing claims of indigenous groups and scientists regarding human remains in museums, couched in the form of a story about fairy-tale jackal people. Some writer (the episode is credited to Alan DiFiore) clearly did at least a bit of background reading on the issue. I’m not saying it’s good Egyptology, but as a metaphor it’s a hell of a lot better than that episode of Numbers where conniving Native Americans are standing in the way of Science because they want that casino money. Maybe the issue’s also been on Law and Order or something and discussed in Sincere Mode, but I haven’t seen it.

I think partly it’s that Grimm (like Sleepy Hollow?) is so damn goofy that every time they do a little deep reading in the folklore or history (which is more often than you might think) it’s really cool, rather than it being a failure every time they don’t.

Anyway, that is a show I watched.

TV Tuesday-ish: “Once We Were Gods”