I was in London this weekend; my parents were over from the US, so my wife and I went down to see them. We were having dinner with some family friends and my cousin, who also lives in London, when she happened to mention that my uncle had consulted on or somehow been involved with this new exhibit at the V&A. We hadn’t heard of it, but it sounded like fun and we had no firm plans so we decided to go the next day.

So what constitutes a disobedient object? The items on display are mainly tools used by protestors in various areas around the world. They include things like protest signs, banners, communication systems, memorabilia, documents, weapons, temporary structures, shields, all that kind of thing.

Most of it is pretty recent — last 5-10 years or so, except for a few items from older movements such as a teacup with a WSPU logo on it or “bust cards” handed out by gay rights activists in the 1960s and 70s. I suppose these are ephemeral objects. At best no one thinks “I’d better hang on to my improvised gas mask; some day that’ll be valuable,” and at worst you don’t want to get caught with these anti-regime graffiti stencils in your house. I think that’s one of the reasons it’s nice to see these things — which are typically cheap and improvised — on display in a museum. A wiser person than I could tell you if that’s a good instance of the V&A’s mission to cover practical stuff rather than fine art. Seems like it!

Me being me, I was impressed by the high-tech low-tech engineering of a lot of it. I wish I had a shot of the sound control booth in a chariot made out of welded bicycles, but here are some other cool things:

That last one is both interesting and depressing at the same time, because on the one hand it’s neat how they’re made out of other things (x-ray sheets, paper bags, newspapers) to be concealed while out and about, but on the other hand the reasons behind that are sobering.

Lots of banners and documents on display, of course. 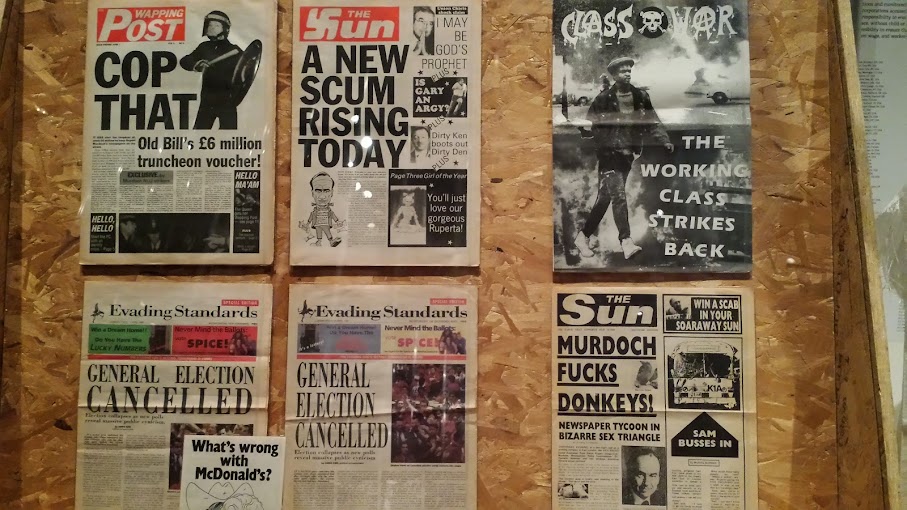 And lots of other great stuff: masked dolls from Mexican Zapatistas, badges and buttons, loads more flyers and cards, placards, shields, lock-ons, maps and signs of protest sites, ordinary objects repurposed as symbols of resistance (Solidarity members used to wear a little electronic resistor as a play on words). The territory covered seem pretty broad — it’s not just British material, although of course Britain is well-represented.

At least one of the groups whose item was on display had some reservations about, I suppose, the way a museum exhibit tames and even commercialises the things it displays. The danger, I guess, is that if your stuff is in a museum, it means that it isn’t alive, isn’t current, isn’t active. And I can see that, although I thought the exhibit, both in its displayed text and the way it presented these objects as the products of ongoing movements, did the best it could to avoid that effect.

I would also have liked to see more information on historical protest movements, but that’s probably just me. Like, the art at the door (and, I think, the display materials) are meant to evoke the evolution of the barricade as a technology, and I would have loved to have seen more of that. Or, for example, they showed the giant inflatable cobblestones used by some modern protests (and very effective they appeared — a police officer in riot gear struggling to deflate a giant inflatable cube looks like a right tit), which prompted me to think about the use of cobblestones or roof tiles as weapons, but I didn’t see it mentioned other than in passing. I didn’t buy the book, though, so perhaps it’s all in there. Again, I guess it’s the problem you have with the material culture of resistance — it’s more likely to be ephemeral than the material culture of the status quo, since conveying permanence is what the status quo is all about. As a result, “disobedient” material culture doesn’t wind up in museums as often, which means museums can become de facto shrines to the status quo. I remember having a similar conversation about castles while doing my MA back in the early 2000s.

So yeah. I thought it was interesting. I haven’t talked comprehensively about it, but I think it’s definitely worth seeing. It’s free and it’s on until mid-February. It’s only one room, although quite a large one; I think it probably took us about an hour to go through at a leisurely pace. The exit does not lead into the gift shop, which would have been a tad much.